Time to catch you all up! Wow, have things changed. Most of it, not for the good. I tried the lower dose of Verzenio last post. Well, we stepped it down one more, and I took it only once a day “to build a tolerance.” Nope. Three days and I was right back with all the same symptoms.

The other drug, Faslodex, is administered once a month. I tend to think of it as easy on the side effects, but hubby believes I enter a dark period for a few days on it alone. Each time I’ve tried Verzenio, I’ve done so right after that shot (actually two, in the buttocks). Maybe the strength of the shot is making it difficult to process the side effects of the Verzenio. 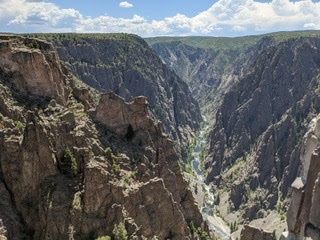 After discussing it with hubs, we decided I would take yet another break for our 35th anniversary — a little driving trip to the beautiful Black Canyon of the Gunnison National Park. Highly recommended, even as a driving trip. Then, a week or so later, I would try again.

Yeah, no. That night I developed a fever and they haven’t quit. Every day around 3 or 4 p.m. I’m spiking small fevers, with no reason known.

Meanwhile, my energy level is terrible, although that may have to do with altitude. Where I live now, I am 5000 feet up, and we were 8 to 9000 at the canyon. My mood off Verzenio isn’t the worst. I can be pretty optimistic despite the fevers and pain — lots of bone pain accompanies the fevers. I am eating, but not as well as I wish I could. Still, I have stopped the precipitous weight loss.

So why the fevers? Why is my energy so bad? Why is my bloodwork, especially my antigens, not getting any better? Very likely, they are all related.

I will admit to being frightened. When I was on Verzenio, I ideated quite often that I felt like I was dying. My system was just shutting down, mostly the alimentary and GI. Dead. Not working.

The worst part is that I was fine with that. I don’t ever want to feel that way again.

My next stop is likely to be Ribociclib, with the “cute” name Kisqali. It is rumored to have few SEs. I hope so. My concern is that I’ve become too weak to fend off these SEs. To address that, and out of an abundance of compassion, I will have a transfusion next week. I sure hope that helps. I hope the Ribociclib works. I hope my antigens drop below the 9000 mark (normal is 40.) The only reason it’s at 9000 for the last three blood draws is that is as high as this test measures.

Gee, great. I am such an overachiever.