It's True: I've Paid Another Cost of Cancer

I had hope that it wouldn't.  It started to sound like it might not.  Then it did. 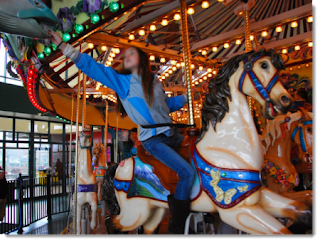 In February, I wrote an open, honest post about the True Costs of Cancer.  There, I discuss the effects it has on your career. I suggested that I had been like a little girl on an old-fashioned merri-go-round, reaching for that brass ring...the ring that I miss every time. It feels like my cancer ensures I just fall right off the horse altogether.

I wrote, "For many of us, cancer signals the end to our future at work. Work changes for ever. Upward movement goes away. Maybe they keep you, but they put you aside; they want you to phone it in." Something like this has happened every time in the past, and, sure enough, it happened again.

When I first got back, everyone was so sweet, but I could tell something had changed. While I was off, my HR leader called my colleague my team lead. I corrected her, but think about it: she doesn't know my leader from Adam, except for what her system tells her. I was already placed under him, I speculated. In coming back, my eyes and ears did not deceive me. It took them nearly two months, but last week, they let me know they had made a position, and nominated a leader (not me), and that there were no plans to grow my program at present.

I'm no slouch at what I do. I may be among the top in the nation; and I have reason to know...I used to conduct research on folks in my field. I have a great background, experience and education.  I have expressed leadership potential, done everything right. Sorry if that doesn't sound humble. I love to do what I do, and I can really help shape a company's innovation culture with my work. I had passionately pitched for growth in my program, as well as an investment in my leadership. Then, cancer.

You see, they haven't been impressed. I work in an environment where my biggest accomplishments have been attributed to the boys. (It's called "bropriation" by the Lean In Movement. Great name.) Even though I've made the company millions; even though I've been the one to rope in the great research that senior leadership touts, even though I have better training, better qualifications, a better resume...I now get to work for a guy who won't treat me like a human being.

This guy had not been very nice to me for months. I had documented his deliberate social isolation of me, while treating my other teammate in a way-too-overfamiliar manner.  He wouldn't say more than a word at a time to me, and usually it was fairly negative.  My visual documentation on that was great: email message after email message, color-coded to show communication where he was communicative with me (positively or negatively), colored in blue, and those where he grunted at me in red. For four months worth of messages, a sea of red. He would interrupt me in meetings; he would explain everything his way. (They also have a name for those traits: mansplaining and manterrupting.) Although he has improved, to this day, I have a very different relationship with him than others he works with. Great. 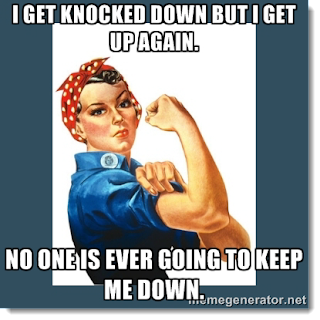 To paraphrase Lethal Weapons' Roger Murtaugh, I'm too awesome for this sh*t.

Maybe not all of this was cancer. (Obviously, some of it is being a strong woman in an broculture IT world) but cancer certainly paved the road to my situation.

But I'm a team player. I said my piece, which will not doubt show up in my next review ("She takes things too personally.")  No one else, but you, will know I am unhappy.  I will put on my happy face, I will not phone it in, I will make great things happen. In the words of Chumbawamba: "I get back up again." No one is going to keep me from being as awesome as I should be. Not redolent broculture. Not even cancer.